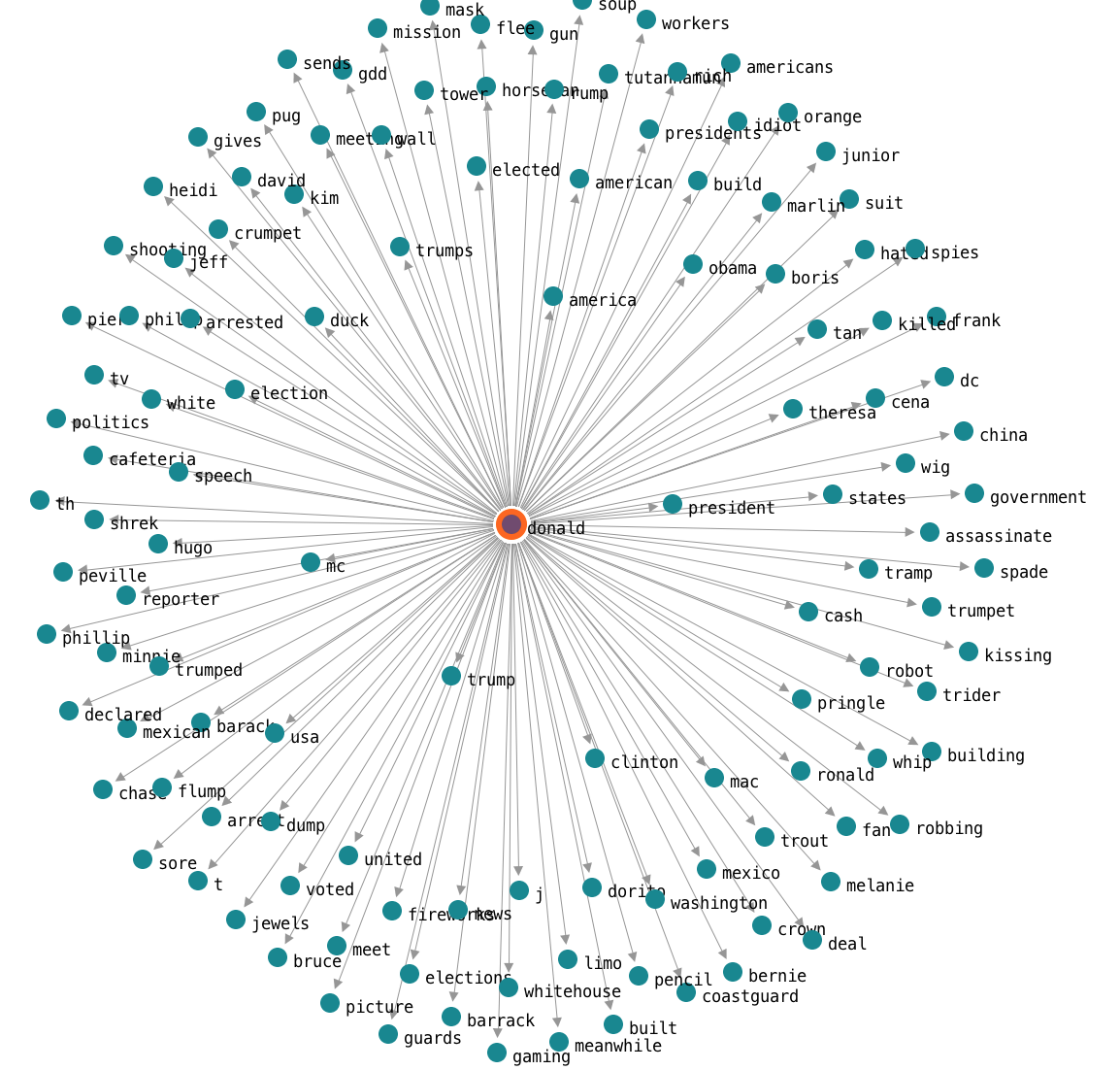 Earlier this year, a record breaking 131,798 children from across the country submitted a story to the annual BBC Radio 2 500 Words writing competition. All this hard work and creative effort produced a massive 55 million words, making over 284 million words in total since the competition began in 2012. Every story is special, and every story is read. You can read and listen to the shortlisted stories over on the BBC Radio 2 500 Words homepage, and tune in to the results show on Friday 16th June, live from the Tower of London. But our question for today is what is the children’s word of the year? Which word fired the children’s imaginations and captured the spirit of this year’s stories? Our friends in the Children’s Dictionaries Department at Oxford University Press have found out the answer… and….

It’s trump! The word shows a total increase of 839% this year. Children used the word as a proper noun, with descriptions of Donald Trump, President Trump and Trump Towers. The word is mentioned in a wide variety of contexts, from the US elections and politics, to tales of space, aliens and superheroes, giving expression to children’s creativity, playfulness, punning and humour. We read about Donald Grumo and Hilary Dinton, as well Donald Trout, Hillary Kitten and Obama Llama. And we hear Trump’s own voice, on a rocket  trip, promising to “make the moon great again”. And yes, trump appears informally as a verb, with tales of passing wind and humorous expressions like trumping trees.

Analysing the stories, it was fascinating to see children’s sensitivity to political events. They use the word trump in the context of president, America, wall, Clinton, Obama, White House, election, debate, campaign, and Presidential limo; they also referenced new political phrases such as fake news and alternative facts.  The interest in politics moves beyond the US, with stories of Brexit, prime minister and even a couple of mentions of Article 50. For younger children, some of the stories reflected adults talking endlessly about political events but for older children, stories tended to reflect more the adult sentiments of political change and the world becoming unpredictable.

Inspired by these emerging themes, we took a fun look at children’s use of the word Donald.  Here we’ve plotted the words that co-occur most frequently with Donald in the children’s stories. We see Duck and McDuck, but most mentions relate to Donald Trump.  This no doubt reflects what the children were learning about at the time when the competition launched, coinciding this year with the presidential inauguration. Last year, Tim Peake’s space walk was foremost in children’s stories but this year, politics takes centre stage, along with perennial favourites Santa, Cinderella, Snow White and footballers Christiano Ronaldo and Lionel Messi. Tim Peake remains popular, as does Usain Bolt — a top 10 hit since the London Olympics in 2012.

Super is another favourite for the ReadOxford team. We have creative takes on super foods (Super Sprout, Super Pea, Super Egg), super accessories (a super suit made from sweets and chocolate) and lots of super for emphasis (super excited, super crazy, super gross…). We loved the image created in our minds of the Hygge Woman, a superhero “who isn’t like any normal superhero saving people from fires or dangers, she rescues them from stress“. Add in the normal superheroes (Batman, Superman, Wonder Woman and Thor), the newly invented superheroes (Blizzard Girl, Comic Book Boy, Language Boy and Crystal Girl) and associated onomatopoeia (ker-plunk, ka-pow, whoosh, swoosh, swish, vroom, thwump, wham, bash, thwack, whack, twang, kabam, klong, boing, arrrghhh, grrrrr, zoooom, whoooosh, crrrrraaaaaashh), 2017 has been a super year for children’s fun, creativity, spirit and imagination. Thank you to all 131,798 fabulous contestants for giving us your 55 million words!

Oxford University Press have produced some beautiful graphics to summarise the quirkiest, the funniest and the most remarkable of 2017 (click the images below to enlarge). Follow #500Words and @ReadOxford on twitter to hear the latest, including the 2017 winners, announced live from the Tower of London on Friday morning. And to learn more about our research, see our videos here.